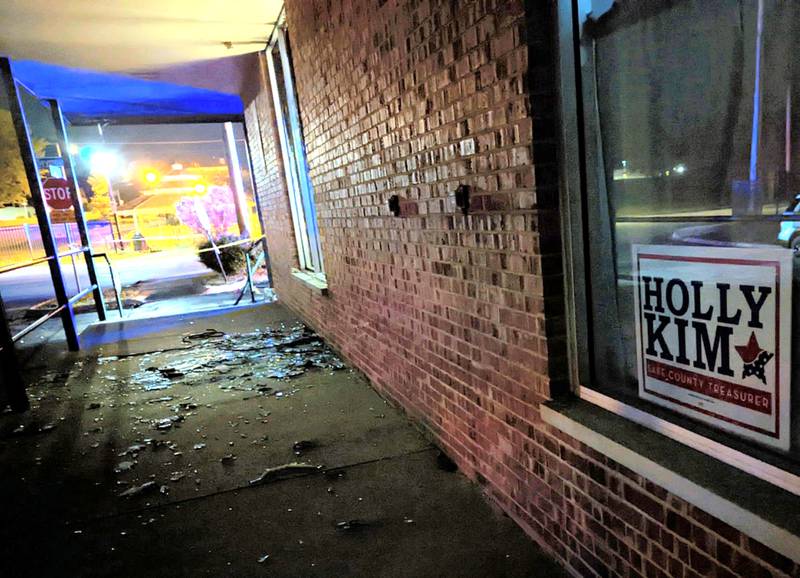 On May 22, Kim saw on social media that Big Al’s Trading Company, a resale shop next door to her campaign office in Mundelein, was on fire.

“I was like, ‘Wait, that’s next door to the campaign office,’” Kim said. “I’m literally in my pajamas and I said to my husband, ‘Babe, I’ve got to go check on my office, there was a fire.’”

By the time Kim pulled up, firefighters had put out the flames and saved the building as a whole, but not before much of Big Al’s had burned and smoke spread throughout the other businesses in the building.

“The unit next door burned to cinders,” Kim said. “Everything was gone. The windows were busted out, that’s how big the fire was, and everything inside was black and charred. All the way down, five units down, it smelled like burned plastic.”

The damage to Kim’s office was significant enough to render it temporarily unusable.

“There was still the smoke everywhere,” Kim said. “My big concern was I had just moved everything from my garage into that office. On one hand, earlier that day I was so relieved I could have space in my garage. At night, I was like, ‘Oh no, everything from my whole campaign.’”

Much of her office was soaked in the emergency response, from soiled ceiling tiles to dripping campaign literature. What wasn’t drenched had been blanketed in harsh smoke from the burning structure. Kim said the building still reeks from the structure fire, as well as plastic and other materials that burned.

“There was toxic smoke in there,” Kim told the News-Sun. “All my literature, the clipboards, everything else that wasn’t a plastic sign got wet. The following day I had to toss it all out because I didn’t want it to turn moldy.”

Kim expects to be unable to use the office until after the June 28 election, where she is running in an uncontested Democratic primary. Power was initially restored to the building on Monday, but it still must go through smoke remediation and the village of Mundelein must approve it for re-occupancy before she can move back in.

“I try to hold my breath when I’m in there, but the little bit that I smell, I’m coughing by the time I get to the car,” Kim said.

“The support has been overwhelming,” Kim said. “It’s difficult for me to talk about having a hard time, so I really appreciated the outpouring of support from the community.”

Kim said she is “still out there doing things” and that the damage from the fire is “just an additional thing to juggle” on the campaign trail. Her campaign yard signs might still smell like smoke, but that hasn’t stopped her from distributing them to supporters.

“Things happen,” Kim said. “No one expects a fire, but you’ve got to keep going.”

Please Join Us on September 29th!